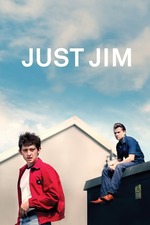 It's official. Craig Roberts is a triple threat! Not only can he act well, but he's a wonderful writer and director, too.

Just Jim is an impressive debut. Just Jim is a story of broken, lonely, people dealing with the reality of the world they're in. I found the film to be a different kind of coming of age story- Half witty mumblecore, half psychological thriller. As strange as that sounds, it works. As the characters and situation progress, the film's tone slowly eases into a more serious place.

I instantly fell in love with the clever dialogue. Although the film is depressing and cynical, there is some humor. It's witty despite not having many hilarious moments. In addition to that, Roberts pays great attention to detail. For example, the state of the gate outside Jim's home matches his emotional state. I found that to be a very creative detail.

Although the editing and cinematography is a little rough, the film is immensely enjoyable.

I cannot wait to see what Craig Roberts creates next. (And he doesn't need to be so self deprecating because he has a lot of potential.)