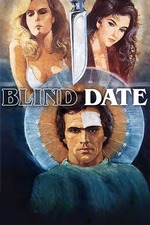 So Blind Date a little 1980's thriller with a crazy (but fun) premise.

Our protagonist is an Americain Ad Man is working on a campaign in Athens Greece - one of the models looks like his ex - that left him after a tramatic event - he becomes obessed with her, and while stalking her (?!?) has a head injury and becomes blind. A friend introduces him to a doctor with a new experental procedure - where his eyes are hooked up to a device (that looks like a Sony Walkman) that takes sound and like radar translates it into a "digitized image" - He has the procedure and witnesses a muder leaving the scene of a crime - and proceeds to try and stop the killer HIMSELF!

Feels like Nico Mastorakis take on a DePalma film. It's better than it sounds - even if it is corny and FX haven't aged well. Great performances by Joseph Bottoms and Kirstie Alley