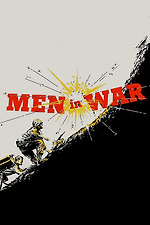 The first thing you notice is how quiet it is. Other than during scene transitions and a dopey closing theme song, there’s very little music in Men In War, and that’s a wise choice: Mann sustains the tension throughout with such immaculate, agonising skill, a soaring score would have really been gilding the lily.

So much to love in this movie (the stellar land mine sequence must have been an influence on Da Five Bloods?), but nothing more so than the electrifying relationship between Robert Ryan and Aldo Ray, both as good as I’ve ever seen them here. The mutual loathing with a buried undercurrent of respect is played with gorgeously textured ferocity; I found myself sitting up a little straighter whenever they were on screen together. Magnificent performances in a magnificent film.