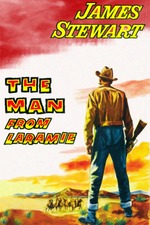 The Man from Laramie

'I suppose I've seen prettier girls in dance halls. You're sort of beautiful, I'd say.'

'That's the nicest thing anyone's ever said to me.'

So what exactly can we glean from this early exchange in Anthony Mann's brawny, hard-boiled The Man From Laramie? Well, firstly, when it comes to accepting backhanded compliments from gentleman suitors, the women in 1950s Westerns were apparently not altogether picky. Secondly, it reinforces the vulnerability at the heart of James Stewart's furtive stranger Wil Lockhart, the titular hero who rides into the town of Coronado on a mission of fraternal intrigue.

There's a definite air of mystery about Lockhart almost from the off. We know this because it says so in his theme tune. 'The ladies loved his air of mystery,' it declares, before admitting that 'everyone admired the fearless stranger' and, furthermore, 'danger was this man's speciality.' That's an impressive chunk of bravado right there, but Stewart just about manages to live up to expectations in a role that's generally considered to be at the darker, grittier end of his spectrum.

And Mann puts him through the ringer, too. From an extended cattle-pen brawl to nearly getting his hand blown clean off at point blank range, Stewart has rarely been more macho or mythic. (The song also claims that 'he was friendly to everyone he met' which isn't strictly true, seeing as some of them end up quite dead. The lesson here is clear: never trust a man with his own theme tune.)

Mann's camera is clearly enamoured with his iconic leading man, though not quite as much as it is with the breathtaking New Mexico scenery, captured here in glorious Cinemascope by cinematographer Charles Lang (The Magnificent Seven, Gunfight at the OK Corral.) There's an audacious 360 pan towards the beginning of the film, as the wild and tempestuous villain Dave Waggoman, played with just enough fiery petulance by Alex Nicol, and his posse of loyal ranch hands ride across the horizon and sweep around to confront Lockhart on the salt flats. The sequence shows off Mann at his most intrepid, a director undaunted by geography and scale.

Narratively, too, there's ambition in spades. From the 'King Lear' dynamic of the central antagonists to myriad sub-plots and diversions, the film delivers.

Lockhart's task is to track down the gun runners he believes sold repeating rifles to the Apaches responsible for the death of his brother, a Cavalry soldier. This isn't the first time Mann and Stewart have collaborated on a story about the perils of weaponry falling into the wrong hands. Their 1950 film Winchester '73 tracks the epic journey of the eponymous rifle as it travels over time from one owner to the next in a stirring fable of the American West.

But if the Winchester '73 is Mann's big, vulgar symbol of the American Dream, then the cache of technologically superior, fast repeating ordnance at the heart of Laramie represents a somewhat sinister truth. There's a reason Lockhart goes after the guns and not the Apaches. He's driven not by vengeance, but compassion. Lockhart wants the newfangled artillery off the market, out of the wrong hands (in this case, the “wrong hands” being the distrusted, non-white Apache interlopers) and ultimately destroyed.

At a time when the American conversation turns once again to the legitimacy of assault weapons and the extent to which guns can be employed in the protection of home and property, The Man From Laramie suddenly strikes an unexpected and chilling contemporary resonance.