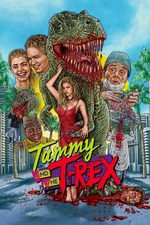 There's so much weirdness here, with a film that lives in an amped up looney tunes logic universe, swinging wildly from teen drama, splattery gore, mad scientist hijinks, and of course a giant ridiculous dinosaur puppet with Triumph the insult comic dog hands.

I feel like the writer/director is trying to accomplish something positive by putting a gay black character near the center of the story, balanced with direct homophobic jokes made by the irredeemably shitty cops. But the writer's also an old straight white dude in the early 90's, so Byron's a messy stereotype who at one point tells us that gay men wish they had breasts. (edit: apparently much of the film's dialogue was improvised during its two weeks' filming, so I guess my sideeye is at like, everyone, not just the writer?)

I've got a mix of feelings here - Mannequin's Hollywood is my first memory of seeing an out gay man portrayed as a protagonist in any media, and for its time, that was progressive, so I've got a soft spot for this specific character trope, even while acknowledging how wildly problematic it is.