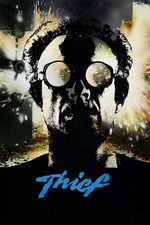 The essence of this film lies more in the humanity of its protagonist, more so than on any huge action he may be involved in. That's where Thief may differ; a trademark of Michael Mann as a storyteller.

This film tends to get lost in the plethora of many iconic films of the '80s. The focus on the micro more so than the macro can be hit or miss for some. Pacing becomes an issue and there's much less action than one might expect. Dare I say, this almost feels like a character study. But make no mistake, it's the full purpose of this picture.

This movie did what Goodfellas did almost a decade later. It took a criminal lifestyle and portrayed it as a job, a way to make a living. When it comes to Frank (James Caan), it was a constant grappling of his upbringing and his current aspirations. Like a thief, he planned on getting away with that life and riding off into a sunset of a comfortable life; an American Dream, so to speak.

The set design of this movie is a true highlight, particularly the night scenes. All the cold colors and neon lights give it a unique feel. At that time, it seemed like it was a thing, given we'd see such scenes a year later with Ridley Scott's Blade Runner.

Caan's performance can be harkened back to a decade earlier when Gene Hackman's Popeye Doyle graced the screens in The French Connection. Complex, flawed, and of questionable character, Caan's portrayal was honest and unafraid of what made him a not-so-good individual. He was impulsive, aggressive, and very tough to like. He's an antihero. Made likable and relatable by contrasting with even worse people he faces as foes during this film.