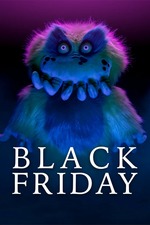 Oh God, what a MESS.
I literally cannot believe that I’m giving a two and a half star rating to a starkid musical, but I guess this is what it has come down to.
Just to be clear, «The guy who didn’t like musicals» is a masterpiece and it honestly pains me to see this as its successor. It set my expectations sky high, and needless to say, they were not at all met.
I have been a fan of starkid since 2012, and I can argue that their strongest point is definitely the humour, of which there have been different versions depending on the show in question. In «Black Friday»... there is none. It sure does evoke a few laughs here and there, but that’s about it. No big comedic moments, no overarching jokes (except maybe some referencing back to tgwdlm), not anything. It is way darker than any of their other shows, and more dramatic, but without any good reason, or anything to balance this out with. At several darker moments, I kept waiting for a punchline, to lighten things up a bit, but it never came, leaving me anxious and unsatisfied.
The plot was a bit all over the place, constantly going at different and new directions without ever pausing to reflect, while drawing obvious inspiration from either pop culture (stranger things, IT) or even previous starkid shows (Dylan’s duet with his long lost lover as a callback to twisted). This is not necessarily bad, just a tad more experimental than my liking. Furthermore, the CAPITALISM & CONSUMERISM ARE BAD and POLITICIANS ARE CORRUPT messages lack the nuance that made America is great again in tgwdlm such a powerful and gutsy song.
The characters suffer too as a result of all that. The acting, however, is great, as one has come to expect, but I personally never felt any real connection to any of them, except maybe Dylan Saunders’ character, because I did miss him greatly, so I might be confusing character with actor a little there. There isn’t really any particular focus on any of them, and they ALL somehow act as plot devices?
I don’t really wanna comment on the music, since it might grow on me, although I sincerely doubt it. There are a few good songs, though none of them very memorable, at least on the first listen, but overall Jeff Blim might have to tone the pace down a bit from now on and maybe put some more focus into the melody. (This is purely some non-expert constructive criticism, and not at all any form of hate towards him, since he is after all, one of my favorite members of the company)
I can see how someone would like this musical, be it that it is fertile ground for theories and speculations, but this kind of vagueness just doesn’t do it for me anymore in fiction. I can only hope that the next (Hatchetfield?) installment will redeem Black Friday.
PS. Jaime Lyn Beatty’s underuse should be considered a federal crime
PS 2. Even after all this, I am still very emotional over Dylan Saunders’ return, if you hadn’t guessed it already