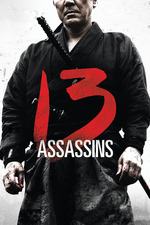 13 Assassins is a flawlessly orchestrated and intensely violent samurai flick from Takashi Miike, clearly made with great reverence for Japanese history and the samurai tradition.

It is absolutely stunningly designed. Miike and his design team create a seriously immersive and authentic world that I honestly could have happily spent a lot more time in.

It occasionally suffers from tonal problems but it rarely drags and manages to hit the mark about 95% of the time.

In a lot of ways 13 Assassins feels like a classic, and a lot older than it actually is. That isn't to say it's dated, quite the opposite, it is made in the tradition of Kurosawa and Shakespeare, it hearkens back to stories that so many people are familiar with and breathes new and exciting life into them.