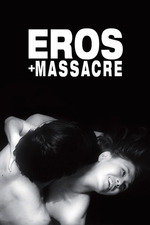 Eros Plus Sheer Boredom for me - I almost completely checked out during the last hour of the director's cut. And frankly, the much-ballyhooed cinematography is bettered in numerous other Japanese films of the time. But it does pass the Bechdel test, a first for any classic Japanese film I've seen that I can recall, so kudos to Yoshida for that. I dearly wish the feminist newspaper had been throughout the film instead of the boring-af, heteronormative-leaning love rhombus that dominates instead.

I suppose this makes me the one person that prefers Coup D'Etat to this, eh?

SPOILER
*
*
*
Frankly I'm glad the editor hung himself at the end, he deserved to for letting any cut of this so long out of the editing suite.