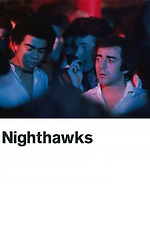 The most groundbreaking aspect of this 1978 film is how absolutely boring and unapologetically mundane is the life of the lead character. That’s it, that’s the film. A boring queer life of night clubs and casual sex, and a day job with clueless straight coworkers.

There’s even time for a frank discussion about gay loneliness, about giving yourself up to the emptiness of being single and gay in a big city. The best thing about this particular discussion (shot almost like a Kiarostami film, with long takes of the main character driving and talking) is how it unfolds in a non-judgemental, non-punitive way.

It’s funny how dozens of gay films (by gay filmmakers) for the past twenty years or so have been guilty of punishing their own characters for having an active sex life, how we still struggle with including sex positivity in our own stories, and here comes Ron Peck, 40 years ago, and paints a so-honest-it-hurts portrait of the boring everyday life of a gay man with no extra judgement, just the facts.

And then there’s the long takes of men dancing at the club (free, horny, gay, pre-AIDS), the hard cuts between vignettes, the long zoom-ins into Jim’s face while he scans the room for his next hookup, the awkward undressing and casual nudity, the camera becoming Jim’s POV lurking through a sea of men, the repetitive morning afters (coffee or tea, the “what time do you have to be at work?” and the “I can give you a ride” followed by a “I’d like to see you again”), the out-of-frame headmaster, the class scenes shot documentary-style just as Laurent Cantet’s Entre les murs would then do it in 2008, the saturated 16mm nights while driving home from the club, the long tracking shot at the party, and the first-date questions to each hookup, allowing us to meet different shades of queer men in late-70’s London as if they were being interviewed for research.

What I’m trying to say is Nighthawks is not just bold in its subject matter, it is also a piece of bold, creative filmmaking from which we should all learn a little something. An important document of queer history.

PS. What was the most realistic element of gay night life shown in this film? The fact that the exact same awful synth music was playing in every scene at the club.