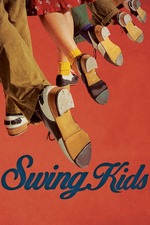 Before I say anything further, let just take a moment of silence for those who released their year-end list before seeing SWING KIDS.

May they rest in peace.

Now now, I haven't even heard of this film until a week ago and that's a shame since this is a film that should be pushed, promoted, and marketed to all over the world.

Not since KUNG-FU HUSTLE that an Asian film has this much capability to entertain its audiences shamelessly, through its masterful direction/ editing/choreography (that would led you to believe that this was an Edgar Wright or Damien Chazelle's film), sympathetic performances from all of its casts, never-ending jazzy soundtrack (and one David Bowie song that is to be added in a long list of David Bowie songs being used effectively in a movie), and a touching story of music as a mean of escapism from all the bad things that's happening in the world.

I expect this to become a phenomenon as it rolled out all over the world in 2019 and if it didn't happen then we certainly don't deserve good things.