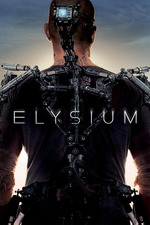 I held out hopes on this one until bitter end.

I'd read the reviews, heard the complaints. But I turned a deaf ear to them. I wasn't expecting Alien, but maybe the schlocky entertainment of a Resident Evil.

I should have listened.

The acting is on a spectrum of bland to bad, the script is a jumbled silly mess with too many plot holes in its worldbuilding to be forgiven. The characters are just nothing. Even the directing felt rushed, with the godawful shaky cam. The racism aspect...I mean, yeah, it's bad enough that seemingly the only white dude in LA is our protagonist. But why vilify the French? What did they ever do, but speak an awesome sexy language?

Elysium is a disappointing, messy bore.

Why didn't I listen?