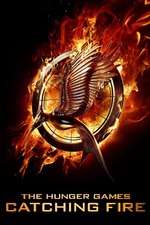 If I'd seen this when I was 12, I would have gone apeshit.

It has all the elements I love from a blockbuster:

1. Characters I give a shit about (and whose names, despite their godawfulness, I actually made an effort to know.)

Jennifer Lawrence brings it. She infuses Katniss with the grit, cynicism, strength, vulnerability, determination, ruthlessness and intelligence befitting a character who is at once a puppet of the establishment and a symbol for change. Of course, the whole meta aspect of cultivating celebrity makes for an especially interesting and unique slant, given Lawrence's recent rise to stardom.

I know I may be in the minority, but I love Josh Hutcherson as an actor. I think he's perfect for the role of Peeta (names, ugh) with his trustworthy face. He just reeks of goodness. Granted, neither he nor Gale (much more interesting this time around) have much to do and both could use a shot of Finnick's charisma, but overall, I'm not that heartbroken about it. I really think the whole love triangle element is way over-hyped. It doesn't bother me that it's there since I think it's completely logical (plus it offers some of the best moments in the film with the calculating interactions in front of the cameras), but the actual love triangle, in and of itself, is of slight importance to the overall story. If you want it, it's there for you, fine, but if not, meh.

The supporting characters are brilliant and the screenwriters and actors did some nifty things to endear them to the audience. They gave Prim a lot more characterization - having her take control of the post-whipping situation was great.

And how do you root for the trident wielding smirky blonde dude who looks like he stepped out of Narcissus: The Play? Have him sprint around a jungle that is actively trying to murder him while carrying his old lady mentor on his back. Dawww. Both Sam Claffin as Finnick and Jena Malone as Johanna proved to be welcome additions to the cast, joining the already great Stanley Tucci, Lenny Kravitz, Woody Harrelson and Elizabeth Banks (whose ridiculous and hilarious Effie probably underwent the greatest character development in the movie).

Philip Seymour Hoffman and Donald Sutherland were both good, but it's clear these two veterans felt like they need an extension on their houses. I did love their evil conversations. It's exactly how I like to imagine evil people organizing their shit. Though they needed a fat cat. The scenes would most certainly have worked better if they'd had a fat cat.

2. Twas pretty. Alright, the technical aspects of the movie won't blow anyone's mind, but it was shot nicely and well edited. The music theme, purposefully, became quite sickening by the end, with its triumphant crescendo contrasting with the disgusting aspects of the society. The fire still looks shit.

4. The script is solid. The exposition is clean (thanks mostly to the worldbuilding of the first film) and there are a fair few good chuckles in here (personally, I guffawed at the idea of the victors who won by hiding until everyone else was dead. Methinks this strategy is solid.)

5. A plot that's gripping, clever and makes sense. Sure, I was slightly disappointed where the second half went, but the strength of the new characters and my investment in the wellbeing of Katniss and co. kept me interested.

The plot resonates with today's society in the most delightfully cynical way. No, this isn't the vague evil of Lord of the Rings or the world destroying war with Zod (which begs the question: so, you destroyed the world. Now what?) This is plutocracy, a reliable foe with its glut for fashion, celebrity, and savagery, where elitism rules and equality drools (made that up meself I did.) Yes, if the first installment too often felt like a limp redux of Battle Royale, this time round the focus is mainly on the omnipotent and oppressive government and its superficial media culture - and everyone's delightful manipulations of said media culture.

With the solid directing of Francis Lawrence, a good script by Simon Beaufoy and Michael Arndt, and a superb cast, The Hunger Games: Catching Fire is a million times better than I had hoped it would be. I was thrilled, engaged and I am pumped for the next. It's 146 minutes long. More please.