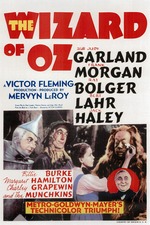 There’s no place like your followers becoming your unfollowers when you give a classic movie a less than favourable rating. Look people, I’m not here to call this thing shit, I understand why people like it, it’s actually one of my mum’s favourite movies. But much like Fantasia, this film felt like it was three hours long and I feel like asking the Wizard Of Oz for some painkillers for my headache.

Sure, this thing would be absolutely mental on psychedelics, but it’s so slow when you’re sober. Without the musical numbers and the filler and the side quest in the third act, this would be twenty minutes long. It has absolutely no business being an hour forty five, especially with an ending that silly. So let me get this straight: They travelled for days, risked their lives and at the end of it, Dorothy could’ve just gone home in the first place? What sort of payoff is that? Not to mention, those prizes they got from the wizard? Total bullshit. The scarecrow gets a phoney Trump University degree, the lion gets a participation award for being a pussy and the tin man gets a novelty clock? If I’d risked my life for that shit, I’d be pissed. And didn’t Toto get a wish? To be fair, being famous for singing about the rains in Africa seems already great enough. What a karaoke king!

I dunno, maybe it’s my bias talking. I’m no musical fan and I still harbour deep embarrassment from when I played a member of the lollipop guild in our primary school play one year, thanks a lot Mrs Greenhalgh! I’ll say this: The dog carried the entire movie and you can’t say otherwise, he’s a star! Three stars for Toto, the best stunt dog of 1939 (mainly cos I’m not sure there were many other stunt dogs in 1939). Let’s hope that sequel is as fucking batshit as everyone says it is.