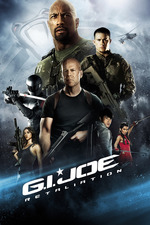 A lot of people are saying that this is better than the first, and I have to call a bit of bullshit on that. As inoffensive as this film is, it is also on the opposite spectrum of stupid fun that Rise of Cobra is.

See, as dumb as Rise of Cobra is, it at least knows it, and lends itself to its own nice little campy tone. It runs with the stupid instead of trying to hide it, and I find that infinitely more enjoyable.

Retaliation, while not masquerading as anything more than dumb fun, doesn't have the same campy tone. It takes everything in the film a little too seriously, and thus, when something insanely stupid happens in this film (and there's a lot), it's almost insulting. In fact, if I hadn't intentionally left my brain at the door, I would be insulted.

Other than that, you get what you paid for, and how can you complain? I mean, I guess you could complain about how the action kind of sucks since they can't establish clear geography for a single second, but at least you know cool stuff is happening. Also, what's with the editing cutting away from the middle of a fight scene to go to a random talking scene that goes on far too long and then returning to the action? It's confusing as hell.

I find myself flocking to films like these more than usual lately because I like not having my time wasted, and you get what you pay for in a film like Retaliation, and so despite all the nonsense and pretty bad action, at least I'm not completely bored, right?

And now a message from our sponsors...