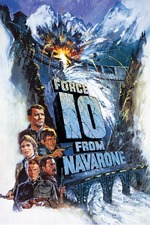 Oh man, is there any more Father’s Day flick possible than a Men on a Mission movie set during WWII?  This goofier sequel to Guns of Navarone has Harrison Ford as the straight man, Robert Shaw as the dry British man of experience, Franco Nero as an evil traitor, Richard Kiel as a massive brutal Chetnik, Carl Weathers as a deserter who just wants to know what the hell is going on, and best of all, Barbara Bach as a partisan in flagrante delicto. Not good per se, but fun.