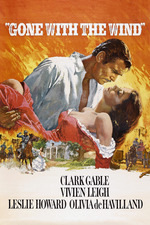 Gone with the Wind

Four hours! Four fucking hours! And even then you don't get a proper resolution! A colossal disappointment by all means, Gone with the Wind is one never ending soap opera filled with characters you never grow to care about, iconic dialogues that look better on paper, and other than its technically accomplished production, there's nothing memorable about this sappy & overlong melodrama.

Set in the American South during Civil War, Gone with the Wind follows a young, spoiled woman who claws her way out of war, poverty & other misfortunes yet has a weakness for a man who never returned her love. Things take an interesting turn when a roguish fellow takes an interest in her after which the two conduct their turbulent romance as years goes on & an era passes by.

Directed by Victor Fleming (who also directed The Wizard of Oz), the first half features some fine, playful interplay between the relevant characters, in addition to moments of true splendour that make deft use of the grand canvas. But soon after we delve into the second half, it becomes an absolute chore to sit through. Even the chemistry between our two leads goes downhill after intermission.

Clocking at four hours, just managing to sit through it is a daunting task but the rewards aren't worth the time investment either. Sure the imagery is rich, glossy & colourful but the drama lacks that same level of intensity. There are just so many moments that it could've done without but the fact that it didn't only makes the ride all the more frustrating. However, I'll admit that the scene just before intermission is powerful & no less than an instant classic moment.

Coming to the performances, Vivien Leigh steals the show with an act that embodies her character perfectly. Clark Gable exhibits a charismatic demeanour at first but it diminishes over time. Olivia de Hallivand is actually the only one worthy of any emotional investment and does well with what she's given. The chemistry between Leigh & Gable exhibits a spark but even that slowly burns out as plot limps forward.

On an overall scale, Gone with the Wind is an exceptionally dull, overly stretched & tediously paced fable that for me has to be one of the most overrated films in existence. There are little flashes of brilliance but for the most part, it's an empty exercise in epic storytelling. Even the so-reputed romance aspect isn't well done. A technically impressive but dramatically unconvincing saga, Gone with the Wind is nothing less than an epic failure in my book and as God is my witness, I'll never revisit this film again.