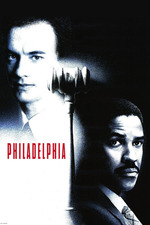 One of the first mainstream films in Hollywood to cover the issue of HIV/AIDS, Philadelphia is a sensibly told, brilliantly crafted & strongly performed cinema that's powerful, essential & heartbreaking at the same time and also works as a thought-provoking social commentary that has a lot to say about the society we live in.

Set in the titular town, Philadelphia tells the story of Andrew Beckett; a closet homosexual infected with AIDS who sues his former law firm after they fire him when they find out about his condition. Unable to find a lawyer to represent his case, Beckett is compelled to act as his own attorney but eventually finds an unlikely ally in a homophobic lawyer.

Directed by Jonathan Demme (known for The Silence of the Lambs), Philadelphia covers a wide range of issues that were prevalent in the community then and still continue to exist in few places but is primarily about an individual's fight against injustice & discrimination. It has as much to say about homosexuality & homophobia as it ends up saying about AIDS.

The finely executed technical aspects are entirely in service of its story & characters. Tom Hanks completely throws himself under the skin of his character and plays him from inside out to deliver a performance that's easily one of his finest works. Even Denzel Washington leaves a lasting impression with a committed input and his scenes with Hanks do make up for the film's best moments.

On an overall scale, Philadelphia is an engaging, enlightening & heartfelt drama that offers an insightful understanding of the disease it's about while wonderfully exposing the darker side of human nature without pointing any fingers. As informative as it is rewarding, this film is simply a plea for humanity that asks its audience to not make lives harder for people who are having a hard time surviving anyway. An essential viewing for everyone.