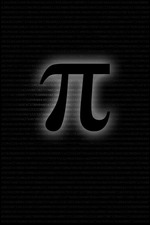 Darren Aronofsky's feature film debut presents the now reputed auteur experimenting with various aspects of filmmaking to carve out his own distinct style and contains all the elements that are now well associated with his works, be it the theme of obsession, biblical motifs, inventive use of camera angles, heavy use of montages, isolated characters or surreal structure.

Pi (π) tells the story of Max, a brilliant mathematician who believes there are patterns everywhere in universe and tries to find the same in stock markets to determine its rise n fall on the basis of his calculations. But his increasing obsession with numbers ultimately results in his self-destruction when he's driven to the brink of madness by the people who are after his research.

Written & directed by Darren Aronofsky, the film gives us a glimpse of his precision eye for art & aesthetics, is cleverly narrated from start to finish, and marks a sensational start to his directorial career. Crisply captured in greyscale photography, the camerawork exhibits a number of innovative tricks which he went on to use extensively in his later works and it also provides a haunting atmosphere to the whole setting.

But it's not just Aronofsky who makes his debut in the film industry with this feature, for it also launched the film scoring career of Clint Mansell who provides an uncanny score to go with its equally bizarre plot. Sean Gullette delivers an excellent performance in the role of Max and carries the film amazingly well throughout its 84 minutes of runtime and he's brilliantly supported by the rest of the cast.

On an overall scale, Pi is a smartly crafted psychological thriller that blends the mathematical patterns with religious beliefs in a very enthralling manner and offers a cinematic experience that's surreal in every sense of the word. Introducing Aronofsky's fresh psyche bursting with new ideas, Pi is an instant classic that remains one of the finest debuts for any filmmaker in recent memory. Thoroughly recommended.