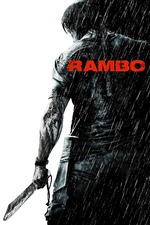 The fourth instalment in the Rambo film franchise, Rambo (also known as Rambo 4 or John Rambo) is an unflinchingly brutal, relentlessly graphic & unapologetically violent sequel that takes the "one man army" approach to a whole another level. One of the most violent films in existence, the film presents its iconic character in total massacre mode as he decimates more people here than he did in the previous three chapters combined.

Set 20 years after the events of Rambo III, the story finds its titular character living a laid-back life in Thailand until he is approached by a bunch of missionaries who want him to venture them into war-torn Burma. While clearly refusing at first, he is somehow persuaded to help them out but when these aid workers are taken captive by the ruthless Burmese army, Rambo teams up with a group of mercenaries to rescue them.

Written & directed by Sylvester Stallone, Rambo opens on a gruesome note that provides a brief glimpse of where this story is headed and while it takes its time to bring the former green-beret soldier into action, it's absolutely worth the wait because the carnage he unleashes in this chapter is unlike anything he's done before. There's plenty of gore & mutilation in store but its barbaric nature makes sense, for Stallone here aims to capture the atrocities humans are capable of.

The sickening savagery of Burmese military regime is illustrated in explicit detail. The script may not pack enough meat for its storyline but the complexity of a turmoiled soul that was so brilliantly portrayed in First Blood resurfaces a little here after being absent from the last two instalments. Camerawork is dynamic, pacing is uneven at times, and Brian Tyler chips in with a thrilling score that stays within the franchise's realms, plus also incorporates Jerry Goldsmith's iconic pieces into its soundtrack, which was a welcome delight.

Coming to the performances, there really isn't much to look beyond Sylvester Stallone here as he single-handedly makes this film work on so many levels. With 20 years gone, Stallone presents Rambo as a much calmer individual who has withdrawn himself into a secluded existence, doesn't care about anything anymore but is still haunted by the horrors of his past. But he's also aware of the killer within him that's waiting to be let out and unleashes him as soon as the opportunity arrives. Rest of the characters are pretty useless but Stallone's strong input easily overshadows that shortcoming.

On an overall scale, Rambo brings back cinema's greatest killing machine in full annihilation mode and elevates its violent content to such an extreme level that it is definitely not for the faint-hearted or easily distressed. The amount of blood that John Rambo splatters on screen during the final moments is something you don't get to see everyday and even if the movie fails in a few other aspects, it works as an explosive action extravaganza that's worth your time & money. An undeniably effective sequel that piles up human bodies with no remorse and delivers the goods with nothing held back, Rambo is action filmmaking at its most barbaric. Don't miss it!