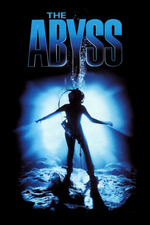 From the director of The Terminator & Aliens, The Abyss is an ambitious, daring & harrowing work of underwater production that explores oceanic life unlike any other example before it, is significant for bringing several technological breakthroughs when it comes to underwater shooting & visual effects, makes clever use of its claustrophobic setting to create suspense, only to throw it all away with its dumb, ridiculous & frustrating final act.

Set at the height of the Cold War, the story of The Abyss concerns an underwater oil drilling platform crew which is tasked with a new assignment; to help a team of Navy SEALs locate an American submarine which drowned in the ocean under mysterious circumstances & to also investigate the cause of its crash. Once the crew embarks on its new mission, they run into several problems and eventually end up discovering something they never expected.

Written & directed by James Cameron, The Abyss follows into the footsteps of his previous works and presents the writer-director pushing himself, his cast & crew to their extreme in his effort to further stretch the barriers of live-action filmmaking & take it to a whole new realm, at which he succeeds. The screenplay is no slouch either for the content carries reasonable weight & characters are well-defined but it certainly could've used a more refined ending.

The technical aspects are state-of-the-art stuff as is the case in every Cameron film so far. Production design team delivers sets & props that seem authentic in appearance, the visual effects are spectacular as well & is one of the first to experiment with CGI, Cinematography makes superb use of its specifically designed camera for shooting underwater sequences & captures every moment in fine detail while Editing keeps the story engaging for at least the first two hours & then goes downhill.

As far as its soundtrack goes, Alan Silvestri delivers a tense, moody score that wonderfully compliments the narrative & goes a long way in elevating its moments of suspense. Coming to the performances, the cast comprises of Ed Harris, Mary Elizabeth Mastrantonio, Michael Biehn & others, and they chip in with admirable inputs to bring their interesting characters to life. Harris is as always dependable, even Mary Elizabeth is strong in her given role but it's Biehn who leaves the most lasting impression.

On an overall scale, The Abyss had the ingredients to succeed as one of the most thrilling, captivating & gorgeous-looking works of science-fiction plus it travels on that route for the most part in quite a comfortable manner, setting new standards in the process but messes up real bad near the end to finish as a technically groundbreaking cinema that falls short in the emotional pay-off department. Still, it's a James Cameron film which makes it worthy of your time & money by default, and although the ending didn't work for me, it might for you. Recommended version: Special Edition.