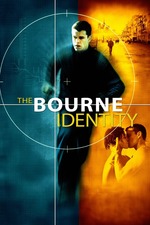 Several grades above your typical spy-thriller, running at a frenetic pace & riding on Matt Damon's strong performance, The Bourne Identity is a pulse-pounding dose of action extravaganza that seamlessly balances its highly captivating premise with full-throttled action to succeed as one of the most entertaining, exciting & satisfying films of not only its year but its genre as well.

Loosely based on Robert Ludlum's novel of the same name, The Bourne Identity tells the story of Jason Bourne; an extraordinarily skilled asset suffering from psychogenic amnesia who tries to find out his true identity. Continuously hunted by police & CIA everywhere he goes, he enlists the help of a German woman to find out why he's being pursued while also trying to rebuild his memory from all the clues he can find.

Directed by Doug Liman, the film really benefits from his kinetic work behind the camera & is a thoroughly gripping ride from start to finish. The screenplay is deftly adapted from the book with major emphasis on plots & characters that comes along with burst of superbly filmed action. Camerawork & Editing work together in harmony as the film is full of frequently edited handheld shots yet everything is presented in a very concise manner.

Coming to the performances, The Bourne Identity establishes Matt Damon as a capable lead performer and the actor absolutely nails his character with a tour-de-force performance, making it really difficult to imagine someone else filling in for this role. The supporting characters are equally well-written & excellently performed but it's Damon's show all the way. Also, John Powell's vibrant score infuses an energy of its own that makes the picture all the more engrossing.

On an overall scale, The Bourne Identity is a first rate spy-thriller with an immensely engrossing plot that benefits greatly from its brilliant direction, clever writing, dynamic photography, tight editing, expertly-filmed action, energetic score & show-stealing lead performance. A fresh breathe of life for its genre that's destined to leave most viewers highly entertained & hugely satisfied with its explosively paced premise, The Bourne Identity is a must for every action cinema lover out there.