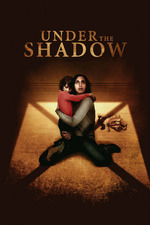 Ingeniously carving a ghost story on top of its grim setting, Under the Shadow is a smartly crafted, patiently narrated & brilliantly performed Persian horror that makes excellent use of its foreboding atmosphere to deliver the chills, and remains a highly gripping & deeply uncomfortable experience from start to finish.

Set in 1980s Tehran during the Iran-Iraq war, the story of Under the Shadow follows a mother & her daughter who find themselves being haunted by a mysterious entity in their house after refusing to leave the war-torn city. As more residents leave the building, the paranormal incidents only intensifies inside their apartment.

Written & directed by Babak Anvari in what's his directorial debut, Under the Shadow is a fusion of family drama & haunted house horror, with former part focusing on its character's struggle to cope with the aftereffects of Iranian revolution while the latter coming to life on its own amidst the disturbing & troubled era of Iran.

Its timeline & setting play a vital role in establishing a sinister environment where evil can flourish, and Anvari takes ample time to familiarise the audience with the protagonist's predicament before letting the supernatural entity make its presence felt. And further amplifying its eerie vibe n tone is its fluid camerawork, tight editing & stellar use of sound.

Spearheading the acting department is Narges Rashidi in the role of the mother who's still reeling from the revolution's impact on her life, which only worsens when a series of inexplicable activities begin unfolding in her apartment. And supporting her all the way through is Avin Manshadi who is in as her daughter, and both of them play their part convincingly.

On an overall scale, Under the Shadow is a confidently directed, deftly written & exquisitely paced chiller that's encapsulated with an ominous atmosphere and packs genuinely effective moments of suspense over the course of its 84 minutes runtime. Haunting, thought-provoking & brimming with the undercurrent of post-revolution effect on everyday life, this Persian horror is definitely worth your time & money.