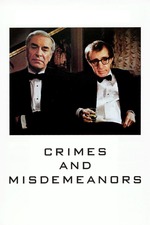 Woody Allen successfully appropriated the existential heaviness of Ingmar Bergman he had been trying to achieve over the length of his entire career. Of course that mystical, skeptical of the Swedish auteur dread gets filtered through Allen's paranoid-New York-Jewish lens.

The eye of God is upon you.

What Allen did so well in the early portion of his film career was to be absurd in his comedy, yet through those absurdities he made his straight characters relatable because we are forced to acknowledge how absurd life actually is. Then Woody moved on from his 'earlier-funny pictures' to more grounded realities. Gone is the mile-a-minute gag formula he had been so focused on before, now with things like Annie Hall and Manhattan, Allen was able to focus on the real world and the cheerful sadness of life. The guy doesn't get the girl, well he does, but that only lasts for so long, after all there are plenty of fish in the sea, they're just all dead motionless sharks. Even a film like Zelig-which borrows the documentary style of Take the Money and Run-is still grounded in a completely honest and human longing for all of life's contradictory happinesses; a chameleon surrounded by fakes is still a chameleon, still something.

So now here I am at the so-far halfway point of Woody Allen's filmography or at least close. Every frame, every cut, every choice really seems self -assured on a level I've never seen from Allen. Crimes and Misdemeanors is just brilliant. I've always considered Woody to be one of my favorite screenwriters, but never before (or maybe since) had he so deftly put his paranoid dread, his slyly absurd comedy, and his overall world view onto the pages of screenplay before.

This is the world we live in, not the movies, reality. The rich and powerful no matter what their pangs of guilt tell them can essentially do whatever they want. This is what the world of Eyes Wide Shut looks like in reality, when the sun comes up and it makes no difference that the acts of night are illuminated, the evil and those capable of evil have nothing to hide because their evil is omnipresently in existence. The phonies can beat out the lesser phonies. Two wrongs do indeed make a right. There are crimes (murder) and there are misdemeanors (infidelity, defacation), but anyone can do anything if they can get away with it. People laugh at god, they use wealth, science, and technology to attempt to out 'see' him, to be more primely aware than their idea of god. Man plans, God laughs. A sense of optimism takes years to define; pessimism takes but a sentence long note. The hopeful get punished for misdemeanors they didn't commit. The rest of the world goes on committing new crimes, forgetting old ones, and laughing about all of them.

The eye of God is upon us. God help us all.