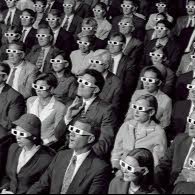 Hot takes and silver linings in the world of cinema. Top Four reflect recent stand-outs for me. YouTube channel @CinemawithCJ for film essays.