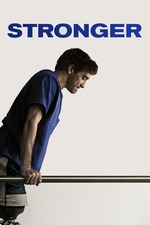 From the outside, you’d be forgiven for thinking that Stronger was the typical awards baiting disability drama - an effort so cynical even Oscar voters saw through it when it came down to the nominations period. After all, it has all the expected elements; it’s based on a true story, and features a non-disabled actor long overdue award recognition consigning himself to a performance that’s physically restrictive. Mercifully, Stronger is far from being the tepid awards bait you’d assume. Director David Gordon Green’s film is largely unconcerned with the act of terrorism that led to his protagonist’s disability, and isn’t overly reliant on using his physical restrictions as a source of drama either.

Instead, Stronger is a far more interesting film that doesn’t quite coalesce into a coherent narrative, with its weightier themes never fully making for easy bedfellows with the surprisingly small stakes at the heart of the story. Gordon Green’s film offers commentary on PTSD and the obsession with people who survive disasters amongst the media and the general public, all while the narrative focus remains tightly on one man’s journey to become a reliable partner to his on-off girlfriend. The dramatic tension from the aftermath of the Boston Marathon bombings takes place on TV sets being watched next door to where the actual drama is happening - everybody in the city obsessed with the search for justice, with the exception of the man most affected by it.

Full review on The Digital Fix