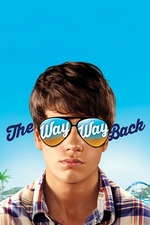 The Way Way Back

Disclosure: This is my favorite film of 2013.

2013 felt like a year from the 80's with all of the coming-of-age(COA) films that hit the cinema. Mud, Kings of Summer, The Spectacular Now each had moments that made them worth mentioning (Especially Mud which was stellar), but my favorite of the bunch, was The Way, Way Back.

A story of a boy (Duncan played by Liam James) struggling to find himself and stability, the film overcomes a few pacing hiccups and clunky lines with solid performances, some great characters and fantastic set pieces.

Duncan and his mother (Toni Collette) have been brought to a beach town for the summer by her boyfriend. (Steve Carell) Here, Duncan finds new depths of misery as his already non-existent self-confidence is further pounded by Carell and his daughter. The poor little bastard seems to have no direction that can result in a reprieve from his misery, until a ride into town on a girls bike and a Pac-Man game brings the manager of a local water park (Sam Rockwell) into his life.

Rockwell, while a tad much at times, has never been more charming as the conduit to self respect and confidence for Duncan. Steve Carell, representing what has come to be the men in his life, has never been a more of a prig. While both men are flawed as father figures, Rockwell's character has an inherent decency that is implied as being absent in the men that Duncan has thus far come in contact with through his mum.

While the film is clearly set in present day, the setting, costume, dialogue and production design don't betray any specific time period. Even most current technology is absent. In fact, it smacks with a tad of an 80's flavor and clearly has a tad bit of nostalgia for that time.

The film is certainly not without flaws or an occasional cliche, but it carries a charm and warmth that many of its ilk do not. I think as we move on from the surge of COA films that we are clearly in, that The Way, Way Back, because of it's timeless look and feel, will endure and find a greater audience. It deserves it.