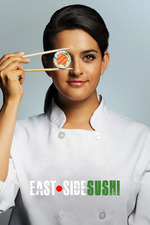 You know… Behind every great restaurant here, there are great Latinos, in the back, in the kitchen, hidden. Prepping the food and making you all look good.

Anthony Lucero’s independent drama “East Side Sushi” makes a strong companion piece with David Gelb’s terrific documentary “Jiro Dreams of Sushi,” not simply because both pictures showcase the traditional Japanese dish but because of the manner by which they underscore the importance of work that must be done in order to deliver not just food to be consumed but a personal experience once sushi makes physical contact with the tongue. It is a movie that follows a rags to almost riches story arc, but it is filled with beautiful observations about Mexican and Japanese cultures, the melting pot that is Oakland, California, struggles women face in a male-dominated occupation, being a single mother, as well as having aspirations beyond motherhood, beyond being the main provider for one’s family.

Right from the get-go, you can tell the film has deep love for the working class. We follow Juana (Diana Elizabeth Torres) waking up at three thirty in the morning to get everything ready so that by early morning her father’s fruit cart is open for business. In a nearly wordless montage, we have an appreciation of her home, her family’s habits, and their determination to scrape by. “Did we win the lottery yet?” Juana jokes when still drowsy Apa (Rodrigo Duarte Clark) sits down for breakfast. We note their clothes; the car they drive; how they carry themselves in public, around a customer, or when their boss is nearby; we are given a genuine understanding that the routine that they have worked so hard to establish can collapse at any given moment. This is a portrait of America that we don’t see enough in mainstream films unless the movie is a so-called Oscar-bait.

The centerpiece of the story is when Juana is hired as a sous chef at a traditional Japanese restaurant. Then we begin to learn about her as a person outside the confines of her Mexican culture: she is a quick-learner, smart, passionate, so spirited that she throws herself in every aspect of the job. Viewers who sign up for overt drama might get their patience tested during the first half because most sequences involve careful observation. But those who go into the picture with an open mind will find a certain joyousness about it even though the story, in its core, is a drama.

We learn, for instance, how sushi chefs pick out the freshest fish from delivery folks, which knife is best to use when skinning a cucumber, the best rice to use for sushi, down to which angle rice must be mixed (and what to mix it with) so that every grain gets seasoning. The movie is at times insane with specifics—and that’s what I loved about it. It assumes that those watching are curious, intelligent, and open to learning about subjects that may not sound all that interesting at first glance. This movie is similar to a documentary in that there is a sense of exploration outside of the expected way of storytelling. Sometimes the drama is found in preparing a type of sushi just right—not just how it tastes but also how it looks.

On occasion, drama is rooted in traditionalism. At home, Juana must deal with her father who would rather have her work at a taqueria than a sushi restaurant because then she could bring home Mexican food after work. Who would want to eat raw fish? At work, Juana must deal with the owner (Roji Oyama) who refuses to have a woman as a sushi chef—whose work station is located not in the kitchen but amongst the patrons—in order to maintain a “feeling of authenticity” at the restaurant. One way or another, these subjects involve race, culture, gender, and challenging long-established ideas or way of life. I enjoyed that although these are topics worth serious rumination, the screenplay also offers carefully observed humor.

“East Side Sushi” is a most wonderful surprise. To me, the most engaging films are those that possess a sense of freedom. I find movies that have this quality tend to be highly confident in going at their own pace and so we are taken for a ride rather than us wanting to push the story forward and get it through the finish line so that we could go back to our day. I could go another hour or two with what Lucero created here.