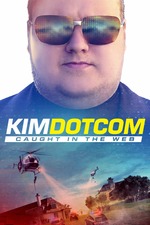 In an age where crooks run the show we're forced to pick which crook to back in the horse race, thus the notoreity of Kim Dotcom (nee Schmitz), an unlikely folk hero, a homely nerd who built an empire on internet crookery but then brilliantly parlayed it into a cause celebre for the privacy rights of world citizens. In the oligarchic age where corporations run the governments along with the paramilitary/spy apparatus at their disposal to preserve their economic monopolies, Dotcom became a latter-day Rob Roy, a status that does not mean he is an angel by any means, but who is certainly one of the most charming public figures to skirt the law since Al Capone. This mostly excellent documentary done with confident pacing tells the story of a lad who went from a small-time hackery operation selling forged phone cards to the Grand Poobah of internet piracy as the brains behind Megaupload, and in its course addresses the corruption and hypocrisy of the established power elites who bend the laws to suit their own purposes. It's mainly a battle of gangsters against gangsters, and, as we saw in the last American presidential election, people are so desperate and tired of it that they elected a demonstrably awful con man as a roll of the dice. After the documentary was made, Dotcom won a major court case, but you can read all about that on Wikipedia. The documentary is not perfect, and does skate over Dotcom's legal troubles in Hong Kong. I'm not sure if that is by design to puff up Dotcom, since the documentary is unabashedly pro-Dotcom, or at least in favor of the privacy causes he purports to represent. His battle against the New Zealand Prime Minister is more fun to watch than anything in the Star Wars franchise. I highly recommend this. (-K)