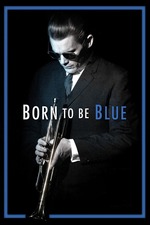 I went into this movie completely blind, knowing only that it was music biopic and Ethan Hawke starred. I'm not even sure I had even heard the name Chet Baker before as I know basically zilch about jazz music.

Initially, I was surprised to discover this film focuses only on a lull in Baker's career in which he was trying to kick his heroin addiction. Then I felt really stupid because of course it is about that, music bios are always about some addiction that fucks up the musicians' life.

What was interesting in Baker's case is that he felt his habit was inextricably linked to his talent. He was not as good a trumpet player while sober. So, the film is essentially about a man's choice of what is most important in life. The life that allows him to be who he is comfortable being or a life of personal sacrifice to allow him to be with the woman he loves.

The tone and pacing of the film has a deliberate, low-key and laid-back rhythm, comparable to the type of music it depicts. It is contemplative yet non-judgmental and free of melodrama. I fell asleep on my first viewing, and I don't mean that negatively. The movie has a pacifying, almost narcotic beat to it, like that of Baker's lifestyle, but is never boring. The ending of the film is one of the best I have seen this year. Both leads give spectacular performances, especially Ethan Hawke. Though its release timing is tricky, I would hope to see Hawke nominated if not seriously considered for awards when the season arrives.