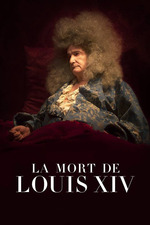 As The Death of Louis XIV begins and the opening credits roll, we hear the sound of some unseen, rickety vehicle. I assumed it was a horse-drawn carriage, but no, it’s just an old man in his wheel chair, being pushed across a courtyard. As the first sound of the film, it’s misleading in that implies motion, by which the rest of the film not characterized. The old man is King Louis XIV, played magnificently by French New Wave Icon Jean-Pierre Leaud, who spends nearly the entire film flat on his back in bed. His health is declining, but he tries to maintain what little semblance of his life as a ruler and ordinary man as he can, but not without staying under his bedsheets, where he can be tended to by a variety of doctors, none of whom seem to be doing him all that much good.

Plot-wise, here’s what happens: Louis’ health gets worse, and *SPOILER ALERT*... he dies. Sound riveting? With Albert Serra’s direction and inspired casting decision, it is. Stillness defines most of his frames, which feel like they could come to a stop at any moment and would evoke the freeze-frame on little Antoine Doinel at the end of The 400 Blows. The candle-lit glow of Louis’ bedroom, where most of our time is spent, is sumptuous and tactile, and Leaud’s presence and physicality is tremendous.

The casting of a cinematic legend such as Leaud to play Louis is what gives the film its poignancy and more than justifies its pace. More than just a portrait of a historical figure’s death, The Death of Louis XIV demythologizes, elucidating that despite their outsized place in history and culture, both the character and the actor are as subject to pain and mortality as the rest of us. Some might argue that no matter how pleasurable his compositions are to look at, Serra belabors his point. Personally, I was more than happy to spend so much time at Louis’ bedside.