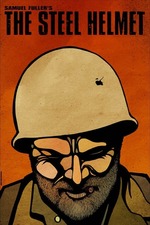 In a long take, a not-yet-named US soldier peeks over the crest of a hill to ensure the coast is clear before clambering over, hands bound behind his back, the bodies of compatriots on either side of him as he wriggles forward toward the camera. Cut to a shot of bare feet coming towards him. Hearing the footsteps, the soldier plays dead, hoping the luck that’s made him the sole surviving member of his unit will last just a little bit longer.

So begins this gritty, hard-hitting Korean War movie by low-budget genre maestro Sam Fuller, who directs with economy and an unblinking eye towards the tough realities of war. The aforementioned troop is the gruff and hardened Sgt. Zack, who is relieved when he realizes those footsteps belonged to a South Korean boy. His own family having been killed, the boy, who Zack nicknames “Short Round”, wants to come along with Zack, who reluctantly agrees. Shortly thereafter, they join up with a motley crew of weary US troops - an eclectic bunch that Fuller efficiently distinguishes from one another - and eventually they all hole up in a Buddhist temple that they mistake as enemy-free.

Fuller stages combat in a realistic fashion, but not without regard for the expressiveness of his settings. In the temple, action is staged around staircases and Buddhist statues, which the camera occasionally pauses to consider on their own, and earlier in the film, a gunfight with enemy snipers plays out in jungle that's dense with mist. More than the action though, it's Fuller's characterization of hard-bitten soldiers and race-related tension between them that leaves an impression. "Dead man's nothin' but a corpse. No one cares what he is now." It's not just what Zack says that conveys his callousness; it's that he's messily chomping on a watermelon when he says these lines, clearly so much more interested in the fruit than the loss he's referring to.