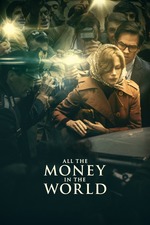 What starts off as a taut, intense thriller, somehow loses it's focus and momentum and becomes a confusing political thriller that goes on for way too long. The performances are good. Christopher Plummer is reliably fine as always. And it was refreshing yet also strange to see and hear Michelle Williams talk above her usual whispery vocal style (although I haven't a clue about her character's accent. Was she southern? Was she a yankee? Because her accent, when it was there, sounded both.) after awhile, I lost interest and just didn't care about how it all turned out. And once it loses its momemtum, the film's running time becomes s-l-o-w-l-y paced, which at times felt like it was never going to end. And I know I cannot be the only one who has seen this who had to fight from yelling to the screen, "Someone, please. Just pay the f***ing money!"