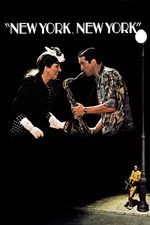 One of the films from the 1970s that Martin Scorsese seems to forget he even made. (The other would be Alice Doesn't Live Here Anymore. Isn't it interesting that both films have dynamite performances from the their actresses and yet, when there is a Scorsese tribute or career overview, these two fine films are seldom mentioned.) Anyway...

This fine yet extremely and unnecessarily long 1940s period drama certainly has its ups and downs but it is compelling and often entertaining enough to keep one's interest.

Robert DeNiro & Liza Minnelli give smashing performances here, even though his character becomes increasingly selfish & abrasive, not to mention frustrating, while her role is a bit trickier because she has make herself, and the audience, feel the love she tries in vain to have for a man who makes it increasingly hard for her. Ms. Minnelli more than shows that her Oscar-winning performance in "Cabaret" was no fluke. Mr. DeNiro is just as good, even though he, right from the beginning damn near, overdoes the intensity that he brings to his character.

Mr. Scorsese does a good job juggling many musical numbers, high drama and just the right amount of comic relief, which, at times, is much needed. Some of the sets and backgrounds look fake as hell, but they are stylishly fake, adding to the experience one has while watching this underrated film.

Beware: one does has to have a bit of patience while watching this film. It occasionally moves at a snail's pace.

The West Side Waltz