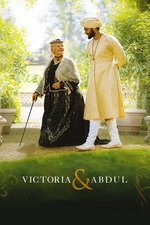 Judi Dench beautifully recreates her version of Queen Victoria, twenty years after playing the monarch in "Mrs. Brown." While her performance here is not as forceful as it was in the first film, she is still damn good here. And while the premise of this film is basically "Mrs. Brown" with a Muslim rather than a Scotsman (more or less), this film is just as good while also quietly and deceptively, packing a bit of a punch.

What I love about this film is the way it sorta tricks it's intended audience (perhaps), older men & women who sympathize with the characters here, wanting them to have their friendship, yet going home, watching television and ranting and raving about how all the Muslims in the US are bad and need to be kicked out, via "their" President. Which perhaps, makes this film one of the better films out there that speaks about the need for tolerance of those we do not understand. The script, by Lee Hall, does not hit the audience over the head with that point, nor does Stephen Frears' direction and the film also does so through humor, which most reviews I have read for this film, do not mention.