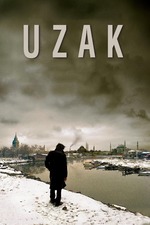 Uzak is about distance.

The distance between rich and poor

The distance between the literate and the illiterate

The distance between thought and words.

The distance between past and present.

It's a distance that keeps us prisoner in our solitary shell.

A distance we can either learn from or suffer in silence

A haunting, unhurried exploration of loneliness, sadness and disconnect, Nuri Bilge Ceylan's paralysingly beautiful Uzak is a potent exploration of the human condition and it's affinity towards an even more human solitude. With his signature slow-burn presentation, beautiful cinematography and sparse dialogue, Ceylan crafts a portrait of people stuck in existence, a profound yet simplistic examination of two estranged men and the solitude they share in solemn silence. Set in the harsh winter of Istanbul and in a dusty, cramped apartment, Ceylan's iron-gripped direction and pensive mise-en-scene, paired with the ashy, sullen atmosphere, makes Uzak a film that bleeds perfection in every precise frame and melancholy in every painful second.

Mahmut is a photographer living a modest life in Istanbul. Smoking cigarettes all day long, hooking up with lovers and slogging the rest of his hours taking pictures of stone slabs, Mahmut's uneventful life gets a jolt of action with the arrival of his cousin, Yusuf, from his village. Yusuf stays at Mahmut's place with the intentions of getting a sailor job so he can support his family back home. But as the days linger on in that tiny living space, the men's vastly different personalities clash but their attempts to escape their seemingly unbreakable solitude will push them to ponder about their lives.

God, what kick to the balls this was. With each film I watch from this director, the more similarities he shares with Andrey Zvyagintsev, an equally brilliant director who puts his own spin on capturing the human condition. While Zvyagintsev's explores more in the vein of societal issues, Ceylan's films definitely feels more human, observing through the lens of common men and women who are plagued with a much more abstract, personal sickness. Uzak is one such film that really hurts where it hits. Ceylan expertly feeds information with an emphasis on subtlety, cutting down on dialogue and dialing up the mood of the film that's in service to the plot. Frames have frames within them, not only for thematic importance but it keeps us engaged in his signature long takes, like a TV running in the background or someone smoking. Narratively, there isn't much to talk about but it's the atmosphere that sucks you in. Literally, not a single fucking second of film is wasted!

Muzzafar Ozdemir and Mehmet Emin Toprak give tour-de-force performances as Mahmut and Yusuf. Winners of the Best Actor award at Cannes 2002, the duo's performance has it's fleeting moments of sadness and a slightly comical side too. Yusuf's immaturity clashes with Mahmut's organised way of life, striking a far-fetched oddball comedy vibe. The best example is when Mahmut falls over the rat trap and also when he quickly switches from watching a Tarkovsky film to lesbian porn. It never felt jarring but somewhat pitiful. It's the brooding silence that these actors can communicate skillfully which make up the entire film, basing their movements on glances and stares. It's not much but it's impactful in it's short time.

Even if you hated the film, you cannot deny how gorgeous the cinematography is. Although it's not as spectacular as Three Monkeys, the cinematography, cranked by Ceylan himself, certainly felt grounded and had depth in them. The scenes in the snow and the Anatolia scenes were striking to watch. The set design was decent and Ceylan's signature soundscapes, whether it be someone taking a long drag or snow falling, added the sense of realism to tie the whole film together.

I apologize if my 'interpretation' of the film's themes is unabashedly obvious or fucking pretentious but Uzak hit my soul. Under it's mesmerizing, achingly slow pace existed a meaning that resounded deeply. It came at the perfect time when I least expected it and it's a film that resembled a problem that I've been burying for so long. The characters in this films are crippled by this inability to tell what they want the most, an inability where pain and disconnect is impossible to communicate with human language. For Yusuf, it's finding someone to love. For Mahmut, it's to express his repressed love for his divorced wife.

Both of them are alike in their search for connection. Isn't that what we want too?

Have you ever wanted to tell someone you love them with all your heart but you couldn't say it?

How about telling a former lover of yours that there's a little love that's still beating for them but the words don't come out?

'Couldn't'... It's that word that changes everything. It's of no use now. All you can do is dream about whatever you lost. It's precisely the ending of this film. Mahmut sits by a bench, watching the sea, not a word spoken but the solitary air around him stays there, over his head, over his mind.. over what 'could' have been...