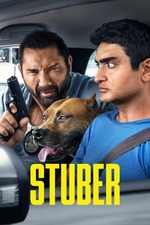 Thanks a lot Matt! Let’s go see this movie he said. It will be funny he said. Inception was performed that day. There is a line in the trailer that got me to chuckle. Premise is dumb and was done better in Collateral, but it could be some fun. I recently saw The Big Sick recently and that was amazing. Spoiler alert go see that movie instead.

There is just nothing redeeming about this movie. Usually even when a comedy isn’t funny I still enjoy the story or like the characters, but this movie didn’t even have that. The film starts out with a terrible action scene. Shaky cam galore! I could see what was going on and completely took me out of the film. They even got The Raids Iko Iwais! So I know he can fight. Also, recently Batista has earned some good will. With his character in Guardians of the Galaxy and his opening scene in Blade Runner 2049.
I can count on one hand how many this movie made me chuckle. The other half is a stupid story with bad action. Just a nothing of a movie. Not disappointing, just flat out bad.