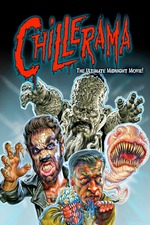 "What would Simon Pegg do?"

Chillerama got on my watchlist in 2011 when YouTuber Coolduder aka Shawn C. Philips made a video on set. He only had a mini role in this but he was the one that got my attention for this film.
I never really knew what this film was about and that really helped.

This is an anthology film. It's about the last night of a drive-in theatre showing 4 films. One about a giant killer sperm, a gay werebear musical, a Frankenstein/Hitler crossover and a film about shit.

This was quite amazing. They somehow managed to constantly surpass the previous short film and that's a true achievement since they start with a giant sperm wrecking New York ála Godzilla.
The 3rd short film about Hitler finding Frankensteins diary and making his own creation is probably my favorite of them all. Joel David Moore plays the absolute best version of Adolf Hitler I have ever seen. Funny to no end, absolutely genius. This film is worth a watch for that alone. But honestly this film offers so much crazy shit it's absolutely perfect for watching it with a bunch of friends and a few beers.

Chillerama is quite dumb but it's a fun out-there hommage to horror films from the past. It's packed with references and quotes too. Perfect for drinking games.
It is also quite vulgar and graphic. I'm really, really surprised this got a rating of FSk16 in Germany even though this is full of necrophilia and severed penises, just for starters...

If you are in the mood for some trashy fun and have some friends that would like to join I definitely recommend this one.

The Man Who Laughs