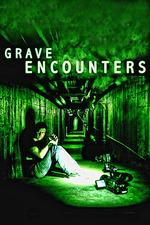 "I saw ghost. Over here. Was a really scary."

It is not a great film but at least they put effort into it. It works fairly well in some aspects and you can take it at least semi-seriously for the most part. The tv show crew is a pretty good depiction of an actual typical ghost hunting tv show. I like the concept and I can emerge myself in the story for the first half of the film fairly well. It's when the deaths and jump scares happen later in the film that it kinda loses me. They just don't work for me and it becomes a pretty mediocre farce with "spooky" stetched out monster face special effects and other corny stuff.
But there are good ideas in here. The fact that the sun never rises and they're trapped in an eternal night is nice and that the layout of the building changes to mock them is decent. Reminds me a bit of 1408.

There is a film called Episode 50 that has a very similar plot and came out in the same year. Grave Encounters is definitely the better of the two.