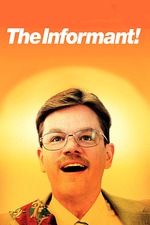 This movie was a real joy to watch. The Informant! is a comedy unlike many others. It utilizes the often overused technique of voice-overs, but they do nothing to service the plot. Instead, narrator Mark Whitacre (Matt Damon) tells the audience his thoughts in a very stream of consciousness manner, spouting off random and amusing anecdotes. In these moments, Damon's performance really shines through, as does the general humor of the movie. Soderbergh knows that there can be no better way to characterize Whitacre, and it works extremely well.

Whitacre, the informant of the title, is the vice-president of an agro-business company who finds himself in over his head with the FBI. He eagerly (and eventually, reluctantly) agrees to inform on his co-workers for the FBI about his company's massive price-fixing scheme. What results is some amusing shenanigans that eventually expand into something much more massive and entertaining. Damon absolutely makes the movie with his impressive turn as Whitacre, who is simultaneously cunning and clueless. Supporting him is an impressive cast, including a number of comedians playing it entirely straight.

The movie is an impressive dry comedy; Soderbergh wrings a lot of laughs and revelations out of Whitacre's character. He's a person we never really get to know, but are happy to spend time with. A few stylish touches, like the retro-style titles, the bouncy Marvin Hamlisch score, and zippy editing help the film move quickly despite its long running time. It takes a lot of bravery to make a movie about corn and lysene, and a lot of skill to make it as amusing as this.