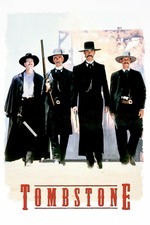 Will Menaker’s review published on Letterboxd:

If you are a dude, or have ever posed as supporting the Dudes Rock movement, and have not seen this movie, or don't recognize it as an unimpeachable classic, you are no daisy at all. This movie is peak masculinity, you may not like it, but it is a fact.

A movie about how much fun it would have been to live in the Old West. Just think about it, fucking around with guns all day, smoking opium, buying laudanum over the counter, drinking 200 proof whiskey, gambling, whoring, having tuberculosis. You can kill someone for calling you a cheater in a card game and everyone will just be like "it's a private affair and it was a fair fight", but more than anything the best part about being in that era of American history was all the love between homies.

I also have to address the cast in this movie. It is more stacked than anything I've ever seen. Let's run it down:

Best of all: every single mustache on screen in this film was REAL.

More than anything though, there has never been a more beautiful expression of the love between two bros than the last scene with Kurt Russell and Val Kilmer.

"What did you ever want."
"Just to live a normal life
"There is no normal life, Wyatt, it's just life. Get on with it."

Tears in my eyes.