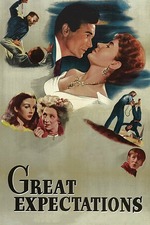 Ok I admit....the only Charles Dickens book that I have somewhat read is A Tale of Two Cities. I have heard about Great Expectations...but had not read nor had I seen any of the many film versions. So I went to this movie a Great Expectations virgin. This one is part romance....part suspense....and part mystery. Movie follows an orphan named Pip and follows his story from age 13 to 25. John Mills plays the older Pip....Sir Alec Guinness plays his best friend (this was Guinness' first speaking part in a movie)....Jean Simmons plays the love interest.

The performances are solid across the board....but I actually give the child performers higher marks than the adult performers. This one is directed by David Lean and earned him 2 Oscar nominations (writing and directing). Final thought: I really enjoyed this one....nice performances....good story...and solid direction makes for a good movie...check it out.

Stuff I find interesting. David Lean would cast his Pip (John Mills) 24 years after this one in Ryan's Daughter...Mills won an Oscar for that movie. This was the first David Lean/Alec Guinness movie....they would go on to make a total of 6 movies together...including all-time classics...Lawrence of Arabia and The Bridge on the River Kwai.