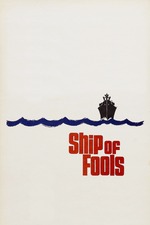 Hogan Hereos' Colonel Klink and Gone With The Wind's Scarlett O'Hara in a movie romance? I would never have put those two together but that is what you get in this Oscar winning movie. It actually got 7 nominations including a Best Picture nomination...it won 2 times.

This one takes place in 1933....and seems like an expensive episode of the Love Boat. A German ocean liner travels from Mexico to Germany in 26 days. The changing political landscape of Germany is one of the main topics of conversations. Hindsight lets us identify the people that will willingly go along with Hitler, those that are in denial about Hitler and those only concerned about themselves. Other story lines include a George Segal love story, a Lee Marvin washed up baseball player story, a Vivian Leigh(her last movie) lonely aging woman story, a Simone Signoret/Oscar Werner romance...and a Michael Dunn(he got an Oscar nomination for role)dwarf story.

Overall there are some interesting scenes in the movie....but this cast seems wasted. This one is very long....very slow paced....and eventually you realize it is not going anywhere. Many of the story lines are left unresolved. About the best thing going for the movie is the end....as the movie characters depart the ship and arrive in Germany....none of them realize that they are actually getting on the Titanic as Germany is about to change for the worst....they truly are a Ship of Fools.