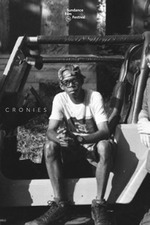 Directed by Michael Larnell. Cronies takes place in St. Louis and follows the shenanigans of three friends, two of whom are black, while the other is white. Shot in black and white, it has an energy, quirkiness, and strength of feeling rarely found in debut films. Though produced by Spike Lee, the film seems to shrug off the things that divide and cause conflict between races in America. Obviously race has always been a hot, divisive issue, especially in St. Louis, but it’s refreshing to see a film that has more optimism about how young people view such things.