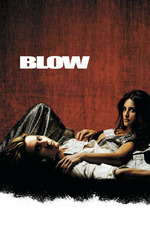 This was probably the last time you could unironically do a Goodfellas narration. But when you're just bloated with matzo ball lines like, "Danbury wasn't a prison. It was a crime school. I went in with a bachelor in marijuana. I came out with a doctorate in cocaine," I'm left with bothersome heartburn. Trouble swallowing that bite smoothly. And the whole film is like that. Like we had never seen a drug crime movie before.

I first saw this film in college, in like 2008, in a dorm room, with a bunch of wannabe cool dudes, and back then it played the room like a fiddle. Blow was really only made for 19 year olds between the years 2001 and 2008. The soundtrack alone, it's like Robert Zemeckis put it together. It just feels like a copy of a copy of a copy of a copy. Even Depp, in primo Depp era, is the safest he had probably ever been. I don't know. I was yawning. Thumbs down on Blow.

Colin the dude is using Letterboxd to share film reviews and lists with friends. Join here.