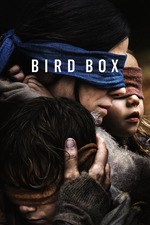 This is like some ungodly abominational love-child between The Happening and A Quiet Place and I hated pretty much every godforsaken second of it. Honestly might rank among the dumbest and nonsensical films I've seen this year. Thinks and acts like it's some grand cosmic horror masterpiece but is anything but. I've even seen trailers for this on TV. I'd think if Netflix had any sense they would attempt to bury this as it's a major disappointment. I read the book and wasn't crazy about it but at least it was kind of creepy and unnerving the way I visualized it in my head. In this adaptation it doesn't seem believable for even a split second. Somehow it keeps getting goofier the more it drones on.

Sandra Bullock's gives probably her most bland and unintentionally hilarious performance. John Malkovich is either a) slowly losing his mind or b) clearly having fun with how lousy this slog of a story is and doing some of the most over the top acting he's ever done. Sarah Paulson is so annoying, or is just me? (Glad she was only in this for like 5 seconds) Lil Rey Howery was criminally underused and had nothing to do and nothing funny to say. It's always nice to see Rosa Salazar but she dipped early on (I would too because this film is trash) Machine Gun Kelly was in this too but I wasn't very impressed with his acting. Same with BD Wong (who is great in Mr. Robot) like what the fuck most of these people are really talented and yet it's like they were dedicated to making this seem as idiotic as possible.

I really don't see how anyone could enjoy sitting through this yet it's getting somewhat decent reviews. It doesn't even lead to anything interesting. Not even worth your time.