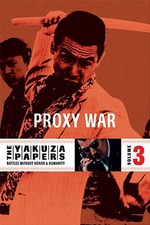 "By 1960, the struggle against US security dominance, the Kishi Cabinet's demise, Asanuma's assassination* and other tumultuous events reflected the actual chaotic conditions of Japan in those days. Similar conflicts were simultaneously erupting all over the globe. As all these wars reflected the interests of either the US or the Soviets, such regional conflicts began to be referred to as proxy wars. These tendencies also began to appear in Japanese yakuza society, as Japan gradually emerged from its postwar chaos."

well, that little history lesson, delivered in voice over at the top of the movie over shots of newspaper headlines, kind of sums everything up. two small families, each in respective thrall to two larger ones, caught up in a massive dispute from which they can expect a benefit far less than that of their "superiors". the narrative is even more dense than in the two previous entries, and much of the plot is accordingly (just like that opening) doled out by the narrator in segments spaced throughout the film (although without a lot of context it's still not necessarily clear what's happening). it's a formal gamble that adds to the documentary structure even as it leaves the viewer playing catch-up. the film is packed with the usual barrage of gangland executions, doublecrosses and lopped-off pinky fingers, but so bluntly explicating everything, starting right off the bat with that central analogy, made this slightly less fun.

*i had to look up both of these things.