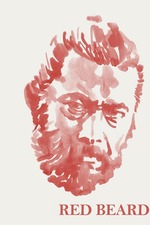 A very moving film, Red Beard is told in an unhurried and episodic fashion, almost like a novel. It is a thoughtful story about a young doctor (Yūzō Kayama) who learns that his chosen profession requires more empathy than ambition. Under the tutelage of the titular character (portrayed by Toshiro Mifune in a subtle yet towering performance), the young doctor learns compassion and respect for his poor and downtrodden patients. It is a film deeply concerned with human nature and the human condition. Like the character Red Beard, it understands the inherent value of an individual life, and that by helping others we bring dignity to our own lives. It's not one of Akira Kurosawa's most popular films, but it's certainly one of his best.

Also, can we talk about that shot when the camera tilts down into the well to reveal the reflection of Otoyo and the nurses? How did they do that???