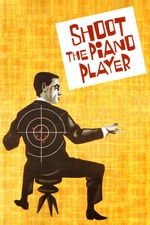 Maybe I shouldn’t admit to this; Charles Aznavour - France’s Frank Sinatra, the “Entertainer of the Century”, writer of over 1000 songs, with a 70 year career, was unknown to me until I checked the spelling of his name on IMDB today for this film. I mean the name sounded kind of familiar... He’s brilliant as Charlie/Edouard, a timid, soulful eyed pianist who is successful with women because he’s sensitive and treats them with respect. And he’s likeable with a tragic past and a great talent, so for the whole film I’m thinking, “No, don’t shoot him!”

Truffaut’s second film Shoot the piano player is a comedic, noir, tragedy that’s also very romantic. The genre mash-up is exciting but I think audiences are more likely to laugh than cry. Truffaut doesn’t try to smooth over what he’s doing. As an example, the film starts with a tough looking man running from other men on a lonely dark street, all grainy and shadowy. He runs straight into a pole and falls flat. Another man helps him up and they have a calm stroll discussing the man’s family and the benefits and disadvantages of married life. The man leaves and the tough is straight back to running for his life.

Based on a pulp fiction novel, there’s a fair bit of narration. Charlie's narration gives insight into just how shy and insecure he is. There’s a remarkably long flashback scene in the middle of the movie that is narrated by Charlie and then suddenly switches to being narrated by his girlfriend Lena (Marie Dubois). You know those little things that you throw on the ground that make a loud noise? In Australia they used to be called “throwdowns”. In this film it seems like Truffaut uses a large range of different and unusual stylistic devices like throwdowns to startle and delight the audience but also sometimes to make us think about things a bit more deeply. Switching to Lena as a narrator is an example. Are they soulmates now? Is she talking from the future? Another is when a violin player leaves the impresario’s apartment as Charlie enters. It’s his turn now. She walks down the hall, clutching her violin like a baby. She stops and listens to Charlie's stunning piano playing. She goes outside and the music follows her long after she couldn't possibly hear it. It’s weird because she’s not a character and we never see her again. Success is not necessarily fair or related to quality and talent. New artists (directors) are now in town. This foreshadows another scene where we see Charlie playing but only his shoulders and head are in the frame. The music continues relentlessly but Charlie seems to have stopped. Art lives on, distanced from the artist.

Knowing even a little about Truffaut, it seems obvious that there are links between him and Charlie, who has to buy books to help learn how to deal with the stage-fright of press conferences (he’s fine when performing). Towards the end the theme of how family background and genetics might influence one’s life and potential for criminality becomes explicit as Charlie worries about it.

Some of the throwdowns are just to make us laugh. There are two chatty criminals who like to have long, friendly conversations with their kidnap victims. Someone makes one of them swear on his mother’s life that something silly he said is true and he does. Then we immediately get a shot of the man’s elderly mother having a heart attack and falling down dead. The way the unusual stylistic elements are used, juxtaposed with serious emotional scenes detracts from the drama a little. But just a very little! I cared about these characters a lot more than in many other dramas and romances that don’t experiment with genre.

I don't want to write an essay but I could on how the different male characters relate to, and speak about women, and the portrayal of women and relationships in general. It’s ahead of its time and exposes certain points of view critically. Just one example; Charlie’s disgusting boss is “in love” with Lena until she uses bad language to him then it’s, “She’s not a girl, she’s not a woman... pure, delicate and fragile. A woman is pure... and magical”.