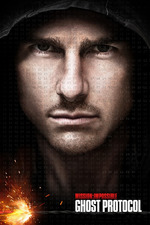 Every single time the opening credits roll with that theme, EVERY TIME, I start smiling like a little kid. It's so good.

Maybe this is an unpopular opinion, but I thought that MI3 was better than this one. The plot of this one is equally as formulaic as the other, but what really hooked me in for MI3 was 1) Ethan Hunt's character struggles and 2) Owen Davian (Phillip Seymour Hoffman's great villain). I didn't really get either of those in this movie. The movie never even talks about Ethan's character until about 1 hr, 30 mins into the movie, and the villain has zero personality whatsoever.

That being said, there are places where this movie improved. I want to shake the hand of whoever came up with all the gadgets in this movie, because they're so gleefully goofy, and I want to own all of them. I also like that they didn't rely on the face mask swap gag this time, because at this point it's become somewhat of a cheap way to get a shock factor.

I liked the new crew, for the most part. As usual, I didn't really care about them, but that's not necessarily a bad thing. Ethan is supposed to be the character core of the story, and I just didn't really get it here.

The movie was pretty unremarkable until that iconic sequence (even if you haven't watched this movie, you probably know what I'm talking about) that this mf Tom Cruise actually did irl. The rest of the movie was also cool, but the finale kind of almost felt like a commercial for BMW.

One nitpick: the jokes miss a lot.